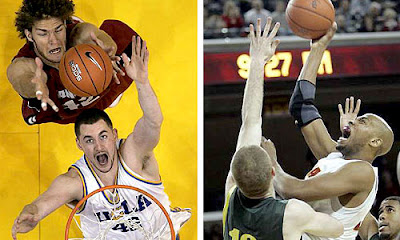 Two years ago, we had the good fortune of being able to attend the 1st round games of the NCAA tournament at Cox Arena here in San Diego and back before we started blogging on the internet, we were still doing it, we suppose, via email which of course didn’t make us appear very tech-savvy but allowed us to spam our intended recipients on whatever subject whether they wanted to hear from us or not.

Anyway, we were so tickled by the experience that we wanted to share it with friends. Here is that email from March of '06:


A quick 'blog' on my excellent adventure to the NCAA Tournament 1st round
games at Cox Arena yesterday:

One of the most disturbing trends in American culture I've witnessed is the
discussion being given to making the day after the Super Bowl a national
holiday. If you haven't heard any of this "discussion", consider yourself
lucky. Its downright embarrassing. Even broaching the topic of a
national holiday to sleep off hangovers is a leading indicator of how this
nation is slouching towards a soft, dull and flaccid Euro-existence. As a
Chief Engineer once related to me: "Self-inflicted wounds are no excuse for
non-performance, cadet."

........ but a national holiday for the first round of the NCAAs? - now
we're talkin'! Seriously, there are no two better days on the calendar,
sports or otherwise, than that Thurs. and Friday in mid-March that mark the first round of the men's basketball tournament. Don't believe me? Look
at all the stories in the news about the general freak-out in the business
world over crashed computer networks due to employees streaming videos of
the games during work hours. How is that not a phenomena? How is that NOT
a good thing?

Anyway, I've been fortunate enough to attend 3 first round NCAA
events over the years. Once out in Arizona and twice here in SD at Cox
Arena. Call me shallow, un-broadened, "in a bubble", whatever..... can't
say I've had a better time here on God's green earth than spending
gloriously sunny spring days in Arizona and Southern California, sitting
inside for 9-10 hours watching 4 straight basketball games.

And its not just the hoops, of course, but the whole atmosphere.
Every one is aware of the pageantry of college hoops... the bands, the
cheerleaders, all the excitement inherent to college athletics but for me
it goes even deeper. These tournament events have been like old home week
for me. I literally bump into all the SD hoops homies who I have played
against at PB Rec, Crown Point, Mission Beach or any of the various rec leagues
I've participated in over the past 16 years here in San Diego. Its
definetely a trip. A lot of these formerly over-educated, under-employed
beach-dwelling "herbal" connoisseurs have got all growed-up and
respectable-like with families and yes, even full-time jobs.

On a semi-related demographic note: this event is decidedly white, male,
middle/upper-middle class. If you wanted to eliminate a large chunk the
"investor" class in the SD area, you would be well-served to plan
"something" for this event.
...... and speaking of that particular "something", we indeed did have a
bomb scare at the Arena. Apparently, there was "noise" on the internet of
a potential terrorist act at one or multiple tourney sites. One of the dogs
brought in prior to the games sniffed out something in a hot dog cart.
They cleared everyone out of the Arena and brought in the ATF Bomb Squad.
Turns out the dog sniffed out a box of plastic forks. Nice work, Rin'.
But better safe than sorry, right? The masses took the delay well,
returning to their cars to (re-)initiate tail-gate ops until everyone was
readmitted about an hour and a half later.

I'd say something about the games themselves but you can read about
them in the paper. Incidentally, I was able to sit in the first row on
the baseline for Illinois/Air Force game. The size, strength, quickness
and intensity that I saw from that perspective vs. my usual nose-bleed
perches was simply amazing. Almost frightening. Flash-backs of Scott
Williams (U. of North Carolina and later Chicago Bulls) dunking on my head in
hi-school summer league went flashing through my head.

Sorry, this wasn't so quick afterall. Hope everyone's brackets are
in good shape - Happy St. Pat's Day and thanks for letting me share the
love.

Many thanks to B-Daddy for minding the store and for providing some excellent analysis on the Fed's intervention into the credit crisis and the 2nd amendment case being heard before the Supreme Court.

My favorite basketball was Whitier Christian high school games, both brothers.....what a high.

'Dawg, glad you enjoyed. If I ever coached ball, I would mimic to a 'T' the style Coach C had us play.