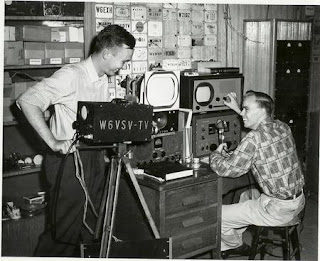 We have this image in our mind of a snoozing, long white-bearded hillbilly, jug of ‘shine in his lap, propped up on a chair in the doorway of a wooden shack under the radio tower atop Mt. Miguel as the station manager for ESPN’s San Diego affiliate, AM 800.

This is the 3rd straight day of dead air on 800 in the 6 o’clock hour where we usually get Colin Cowherd’s West Coast-only “mysterious first hour”...... unless, of course, we get "Mike and Mike" instead. Sometimes they’ll switch to Cowherd’s show in mid-segment without a break or warning. About two months back, we were even treated to both shows which were broadcast simultaneously. Not for just a few minutes or even one segment but for an entire hour!

This is on top of the usual “music-only” traffic reports where one is to visualize, we suppose, that jack-knifed trailer on 805 South at H Street or the usual slowing over the Santee summit on the 52. And then, there are the station identification breaks right on top of regular programming. This all happens on a daily basis and its been going on for years. Honesty, who the hell is minding the store?

Anyway, we’re going to give XTRA Sports AM 1360 a try as our default alarm-clock radio station in the morning. The two dopes on 1190 have pretty much given up any pretext of talking sports unless its Padre or Charger-related and even then its too homerish for our tastes.

P.S. We couldn't help but link to this New York Times article from back in '04 we found that pointed to Air America's arrival on the scene as evidence of a leftward lurch in San Diego. We'd never have found it if not for doing a google search for XTRA, who replaced AA at the 1360 location. Actually, article points out that Clear Channel, the syndication network, has probably been unfairly branded as being a conservative shill because of their syndication of Air America. So instead of being beholdent to right-wing ideology, they now can be accused of mere beholdence to the all-mighty dollar.

1160? Do we have a fourth sports talk radio station down San Diego Way that I'm not aware of??

I'm assuming you would be adding 570 KLAC to the mix. When I can pick it up, I do enjoy Laker chat with Homer, Michael and the Brick from time to time.

Please explain to me though, how everyone's retard little brother, Petros Papawhateverus, gets a gig?

Gack! Not Vic the Brick Jacobs! I hate him! The only pleasure he's given me was from the Lakers last trip to the finals as he relentlessly picked them to win and they went down to defeat.

Petros has a talent -- the kind that gets you on Best Damned instead of chairing MENSA's monthly meeting. Petro's schtick appeals to some, I guess...

You've brought new meaning to the old "Marching left to right across your radio dial" mantra of football play-by-play announcers.