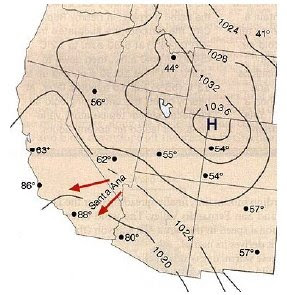 Seeing the Santa Ana winds kick up today reminded us of some of the mystery surrounding this Southern California weather phenomena.

For those of you visiting from out of town, Santa Ana winds are formed by a high pressure system in the Great Basin (between the Sierra and Rocky Mountains) – the air from this system is then pushed through the canyons that separate the high desert from the coastal plains below in which much of L.A. and Orange County set. The combination of compression through the mountain passes and the descension from higher to lower elevations warms and dries out the air, respectively, providing the region with its unseasonable warmness when they occur most often in the fall and spring.

But enough of all that…. The Santa Ana winds are as much a part of the local culture, particularly, L.A.’s as the Rose Parade, Tommy's, Randy Newman and the Hollywood sign but not necessarily a positive one.

One of the urban myths that always surrounded the Santa Ana winds was that they lead to an increase in violence and crime. We suppose this could be directly attributable to famous L.A. detective author, Raymond Chandler who wrote of the winds in Red Wind:

“There was a desert wind blowing that night. It was one of those hot dry Santa Anas that come down through the mountain passes and curl your hair and make your nerves jump and your skin itch. On nights like that every booze party ends in a fight. Meek little wives feel the edge of the carving knife and study their husbands' necks. Anything can happen. You can even get a full glass of beer at a cocktail lounge.” Pretty ominous, huh?

And about the name? Again, there is some mystery. Since the winds have also been referred to as “devil winds”, there is the opinion that it originated from the bastardization of the Spanish word for Satan, “Satana”. A more pedestrian explanation is that it was derived from the Santa Ana Mountains which lie on the eastern boundary of Orange County and which would be the direction from which the winds would blow.

We like the first explanation better. We admit: we’re campfire conspiricists at heart - we like our myths and we enjoy musing on the idea that the Santa Anas we’ve lived with our entire lives have a personality and do have a bit of mystery and intrigue attached to them.

...and Dallas Rains is our love child.

Anon, are you serious? Nice body but she's got a face made for radio.