That Pillar of Fire just got a little Brighter... and Smarter. 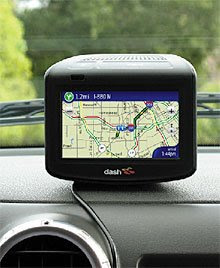 We want to thank everybody who participated in the poll – your feedback was much appreciated.

B-Daddy, who claimed that GPS use was not a malesmanship-sapping technology, nevertheless, lamented in-car GPS’ lack of “smarts” i.e., it could give directions from point A to point B but could not provide real-time feedback to the driver as to the driving conditions that driver would be facing. B-Daddy likened the type of aggregate feedback from multiple sources that would smarten-up GPS to Wikkipedia which relies on its disparate group of contributors for its articles.

Well, fear not, B-Daddy. We’re one step closer to smart GPS. Dash Navigation of Sunnyvale, CA began selling this week two-way Global Positioning Systems for cars in the hopes of creating a network of better informed drivers. From the article:

“A central computer will collect speed and location information from each car, then create and transmit back what the company hopes will be the most complete and up-to-the-minute picture of traffic ever created.” Story here.

Now, if they could just do something about that $599 dollar price tag we might be a little more interested.

Get a friggin Thomas Guide, very accurate and you can find your way around traffic, road closures, and improve your manly skills. About $40.00, and I can find anything anywhere faster and more accurately than mapquest, google or yahoo maps.

Sarge,
Look up the term "anachronism" and then look in the mirror, dude. I successfully made a speed run between San Diego and San Luis Obispo and back using a combination of GPS and wireless web access to check sigalerts and am convinced we saved ourselves some serious road time.

Dean,
Saw the same article, but thanks for the tip. I had the same reaction to the price tag as well. I may like technology, but you all know how cheap I am.

Very funny, but you won't be laughing when the Chinacoms or aliens (space, not illegal) shoot our satellites out of the sky.

Don't come looking for the Dawg to help you out then.

By the way, have you ever checked out Sigalert.com? Very helpful