The Pac-10 is overrated? 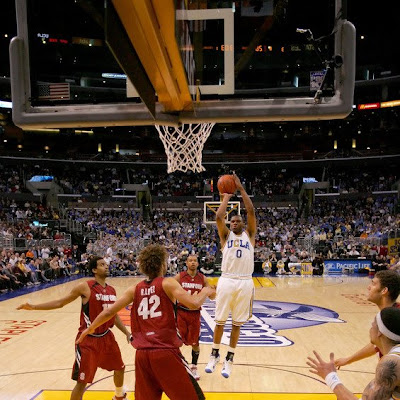 Prior to today, there would be no question mark after the post subject. As West Coast homers we’re pleased as punch that the folks that cover college hoops for ESPN and CBS have noticed the fine ball being played out here this year but as often happens when an NFL player is finally recognized by the fans and the media and is awarded a Pro Bowl spot, its probably a year too late.

We feel the Pac-10 was actually a stronger conference last year and we owe this largely to the fact that Oregon and Arizona (though hobbled by injuries) have underachieved somewhat and have not lived up to the lofty expectations people had for them at the beginning of the season.

As we said, though, that was prior to this morning when we (full disclosure: any following of hoops yesterday was done via a friend’s Blackberry as we were wine-tasting in the gloriously green Temecula Valley at another friend’s birthday) came-to this morning and cracked open the fish wrap and saw that #9 seed Pittsburgh defeated Georgetown for the Big East championship, a 16-16 Georgia Bulldog team was going to play unranked Arkansas for the SEC tourney title (this, after playing and winning 2 games yesterday because of the tornado that ripped through the Georgia Dome thus postponing their quarterfinal match-up against Ole Miss) and a 16-18 Illini squad was taking on #8 ranked Wisconsin for the Big 10 championship.

Everybody has their own idea of how to rate and rank the respective conferences and we have always felt that you can make the numbers and stats say anything you want regarding the relative merits of the conference so we’ll just say this: We’ll take the overall strength of the top 7 teams of the Pac-10 (UCLA, Stanford, USC, Washington St., Arizona, Oregon and Arizona St.) against the top 70% of any other conference in America (this percentage figure factors against mega-conferences like the Big East that have 16 teams and thus a natural advantage in the “top 7 teams” argument).

P.S. Our arguments for UCLA not being a Final Four team keeping on taking hits as they gutted-out a win against Stanford, 67-64 in the Pac-10 championship without starting forward, Luc-Richard Mbah a Moute (sprained ankle) and an ailing but still playing center, Kevin Love (back spasm). “Barometer Boy”, Josh Shipp had only 7 points on 3 of 10 shooting but that was more than compensated for by point guard, Darren Collison getting off for 28 points while playing all 40 minutes. Stud.

P.P.S. As of this posting, #8 Texas is down eight to #5 Kansas with 10 minutes left in the Big 12 championship. Were Texas to beat Kansas and also being a team that is the only one to beat 3 currently ranked top-5 teams (UCLA, Tennessee and Kansas in the regular season), not be worthy a #1 seed?)