How about another Lottery instead? 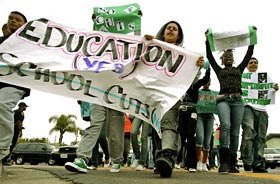 We’ve been accused (in these very pages) of never meeting a tax cut we didn’t like or thinking there was nothing ill on g#d’s green earth that a good ol’-fashioned tax cut couldn’t solve. An oversimplification to be sure but considering the alternative reflexology as practiced by Democrat state legislators, we’ll wear this broad-brushing proudly.

There was a voluminous comment exchange here on our home-schooling post that drifted from the question of teacher credentials to funding. The issue of funding has now been put on the front burner state-wide as California governor, Arnold Schwarznegger has proposed school-funding cuts in the wake of a huge budget shortfall.

Story here from the San Diego U-T, wastes no time in addressing the giddiness that some lawmakers see in this predicament. From the first paragraph:

“Democratic legislators, who have long wanted to get more money for underfunded California schools, think they have a historic opportunity to push for a tax increase.”

Yep. Its in the air. Can you feel it? And “historic opportunity”? Wow. That term is usually reserved for political movements that push for the franchise to vote or defeating fascism or communism or at the least a Laker 3-peat…. but to raise taxes? Almost makes you feel guilty you aren’t pulling your fair share, doesn’t it?

In the 16th paragraph of the story, it finally addresses some of the “reforms” the Governor and Assembly Republicans would like to see implemented that we would like to see also like gutting, err…. “streamlining bureaucracy, more local control and more accountability”.

We ain’t holding our breath, though. If any of you harbor any delusions that the California Teachers Union (and lest we be wrongly accused, we are referring specifically to the Union apparatchik and not necessarily the rank and file which they represent) hold the welfare of the children in the same regard they do to maintaining and expanding their own power, please watch video here courtesy KT.

Now, where's that paintbrush? We need another coat.

Hooray for Drew Carey, exposing the mafia-like thugocracy that is the combination of public education and teacher's unions. Every dime that is pulled away from that rat-hole is better spent anywhere else. The teacher's unions are perhaps the most evil, venal, legally-tolerated organization in our society. Daily, they snatch any hope of a better life from millions of defenseless American school children. Thank you for shining another small light on their hypocrisy and chicanery.