Our Little Catholic School up on the hill wishes everyone a very Good Friday. 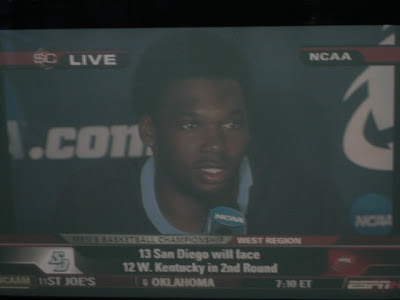 The Toreros of the University of San Diego, a #13 seed just upset the #4 seed Uconn Huskies 70-69 in OT in one of the guttiest team performances we’ve seen in quite some time. Box score, here. We saw this same team in person back in December at the city championship against San Diego St., a loss, and it would be safe to say that we did not see this coming. This represents the first NCAA tournament win for the city of San Diego.

With leading scorers, center Gyno Pomare (pictured) and mercurial point guard, Brandon Johnson both on the bench having fouled-out, sophomore guard De’Jon Jackson who was previously just 1 of 8 from the field hit a step-back 17-footer with 1.2 seconds left in OT to clinch the win for USD.

Thank you, De’Jon. Instead of cursing a loss opportunity because of some spotty foul-shooting down the stretch and some questionable officiating, you and the rest of the gritty Toreros just made this Good Friday a little more gooder.

Our bracket is ablaze right now after having both USC and Arizona getting knocked out, teams we had going to the Elite 8 and Sweet 16, respectively but right now, we don’t care as its always nice to see a team that has no business doing so getting by on pure heart over an athletically superior college basketball blueblood who is wondering right now what just hit them.

Dean,
What a great game. So often we see the gutsy underdog blow the big lead to the more athletic powerhouse and collapse in the final minute or overtime. The Toreros were having none of that. I remember reading that the UConn coach had told his team that USD might be the next Gonzaga, maybe they should have listened.