Hang On To Your Hats 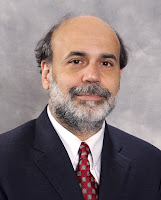 B-Daddy here. Brilliant though he may be, I'm not sure this man knows what he's doing. He is Ben S. Bernanke chairman of the Board of Governors of the Federal Reserve System, aka the Fed. The Fed's rate cut today was greeted by cheers on Wall Street as the S&P 500 soared over 4% today. (See how that sounds so much less dramatic than "the Dow soared by 420 points," good to keep things in perspective.) However, I am very, very nervous about the return of inflation. My traditional inflation harbinger is the price of gold which closed up $1.70 an ounce today at the previously unheard of price of $1004 an ounce. The price of gold has spiked from an historically high mid-600s in early 2007 to over $1000 an ounce today. There is a nice chart here. The price of oil, another commodity is way up as well. Parallels to the 1970s abound.

I think that we have been fooled by the lack of consumer goods price inflation that past Fed easy money policy did not have the deleterious effects it has had in earlier years. While consumer prices stayed steady from the late 90s on, due to global competition, we had a stock market bubble followed by a real estate bubble. I think the cause of both bubbles was that the price of money, i.e. the interest rates, were held artificially low, and so the risks of these investments were not properly evaluated by investors. Exacerbating bubbles are the bad behaviors that they encourage. The Fed intervention in loaning money to JP Morgan to purchase a failing Bear-Stearns will only exacerbate this mess by encouraging bad behavior (this is called moral hazard by my favorite Brit magazine, sounds so much better.) The Fed is dipping deep into its reserves to effect bail outs of financial firms because Bernanke is concerned that a collapse in the financial sector will lead to a lack of liquidity that would trigger a 1930s style depression. I disagree, but who am I? I also think we are learning the wrong lessons from the 1929 collapse where clumsy Fed handling of interest rates by raising them quickly triggered a stock market sell off. Ultimately, though, most economists agree that the stock market crash was not the proximate cause of the Great Depression. Directly intervening with specific firms in the economy is an untested method of monetary policy. They seem to be making it up as they go at the Fed and that makes me very, very nervous. So hang on to your hats, this could be a very wild ride.

Update #1. Understanding how the housing market subprime loan mess has caused such widespread financial upheaval is difficult. The New York Times, amazingly, does a pretty good job of explaining in this article.