Masters of the Obvious, we are. 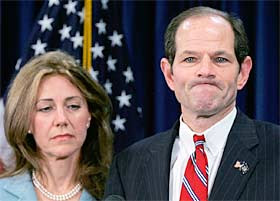 Hey, give us a break. We gave Larry Craig the business here and here… you didn’t think we were going to let Spitzer off the hook now did you?

Those looks, well her look, has to be the most pitiable we’ve seen in ages. Its that mushroom cloud blooming over her marriage, her career, her children…. her entire life while she sticks it out (for now) next to Slappy.

Alright… enough of that. Here’s a roundup of related items:

Why’d he do it? Call it the Bill Maher syndrome: just makin’ up for some lost time. Also known in some circles as the BwD syndrome though its yet to kick in.

Some thoughts on the matter here from a woman who probably cancels vacations when something like this goes down.

And this from ‘Kos-ville. Careful… what you’re about to read could be considered tantamount to waterboarding. Thankfully, the commenters take this idiot to task on account of his “logic”.

Finally, this from Dr. Laura on whom we could’ve bet would have a take like this. The woman is insane and we mean that in the most complimentary of ways.

Normally, I wouldn't give a hoot about any given politician's ZipperGate episode.

But when a guy's political foundation is that he is going after the cheats and liars as some sort of latter day "Untouchable", I would be sorely disappointed if my fellow Dems in the NY state legislature didn't back the GOP play to oust him.

That's a political BP fastball just looking for a fence to clear.