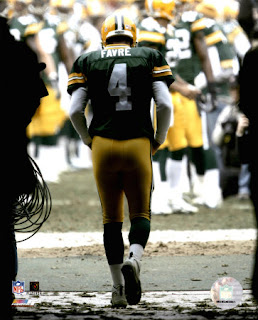 Brett Favre stepped down yesterday as the quarterback of the Green Bay Packers after 17 seasons in the NFL.

Take all his records, the games-started streak, all the wins, the 4th quarter comebacks and throw’em out the window. That’s right – throw them out. They don’t matter. Outside of perhaps Jackie Robinson and Muhammed Ali, never before was there an athlete that had so many measurable accomplishments that would be remembered least for them.

Favre stood apart from the others. He certainly stood apart from the other top quarterbacks in the game. Peyton Manning is a technocrat and physically if not psychologically unable to even attempt some of Favre’s improv out on the field and Brady’s just a little too perfect. Brady would call the plumber if the pipe underneath the sink sprung a leak… Favre would fix it himself.

We watched Brett Favre grow up… from Southern Miss on Saturdays to the most unique city in the NFL, Green Bay, on Sundays. The brash kid from Kiln, Mississippi seemed to possess that unaffected nature unique to the American South that suggested that he really didn’t know how he was supposed to act… on the field, in the huddle, in the film room and especially off the field. Mind you, he didn’t care, though he never tried to hide that fact.

And because we were witness to his coping with his father’s death, his wife’s breast cancer and his own drug dependency, the same experiences that effect many of our own lives, Brett Favre became one of the most beloved athletes ever.

… and yet, forever the gunslinger. The Saturday afternoon matinee’ Wild West hero that galloped into town at full speed, made the women-folk swoon, tossed the game-winner with no time remaining and then rode off into the sunset…. only to return next Saturday to theater near you for more feats of daring-do!

Because of all this, we can’t recall an individual that embodied the American everyman as well as the American superhero more fully than Favre.

This post is dedicated to ‘Dawg.... and our Dad who always loved those gunslingers with the crooked smile.

Thank you Brett for making the game so much fun and for great years.

I may opine in a later comment, but you hit the nail on the head.

Actually, I would've thought Mongo to be a little more charitable in his comment rather than merely unintelligible, incoherent and palsy-like. No breaking with convention I suppose but still... Favre was one of those guys that would play for the love of the game like they do in college... Div. III college, that is.

Did Brett Favre return the Rams to the Coliseum without my knowing it?