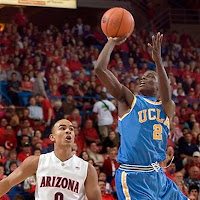 From 2:30 P.M. to 3:15ish, that was the button on the remote getting the workout of its life as both the UCLA Bruins (at Arizona) and the Lakers (at home against the Dallas Mavericks) were locked-up in tight ones and we were going back and forth between the two in frantic fashion.

The 4th-ranked Bruins hung on 68-66 against the Wildcats for their 7th straight victory against them. Story from SI.com here. (By the way, our man, Billy Packer was kicked out west to broadcast this game for CBS. At this very moment, Packer is well into a 4-5 hour in-flight harangue of his broadcast partner Jim Nantz over how this Sunday afternoon game will put them back in New York 3 A.M. EST and how that will just shoot to hell the entire Monday work day and why couldn't they do a Saturday game instead and.... bitch, bitch, bitch....)

The Bruins have been getting a lot of love nationally as both Jay Bilas and Andy Katz of ESPN have called UCLA the best team in the nation. UCLA’s ability to lock-down teams with their pressure man-to-man and ability to create turnovers out top with guards Darren Collison and Russell Westbrook remain their strong suit.

We worry though at times that as good as the guards are on defense, they play a little out-of-control on offense, a cardinal sin come tournament time. Also, Josh Shipp, a junior, who is/was supposed to be that go-to guy in the Bruin offense…. that guy they could look to get them a bucket or go to the rim to draw a foul and get to the line in crunchtime in the same manner Aaron Afflalo was the past two seasons for the Bruins, is experiencing a crisis of confidence right now. He scored only 7 points on 3-7 shooting and didn’t look comfortable doing it. Whatever is ailing him, hopefully he gets it worked out soon.

We’re going to keep a close watch on things because as much as we like this team, the sometimes skittish guard play and Josh Shipp’s apparent regression has us worried.

Now about these Lakers… They won 108-104 in OT against the Mavs with Kobe Bryant dropping 52 points. They have now won 11 of their last 12 and as of this posting are a ½ game ahead of the Spurs in the West who are playing the Nets this afternoon.

Barring catastrophe, Kobe appears to be the favorite to win the MVP this year. If he does so, we will file the achievement under “irony” as he probably should’ve won it in any of the 3 prior seasons. Kobe actually has some players around him this year like Pau Gasol and emerging young talents like the injured Andrew Bynum, Jordan Farmar and Ronny Turiaf.

You know, the Lakers just might win an NBA championship if they can find a way to contain Lamar Odom’s room temeperature basketball I.Q. In the last :30 of regulation, Odom missed two free throws that would’ve stretched the lead to 3, completely lost Dirk Nowitski allowing him to drain a three to tie the game when everyone in the house knew he was going to get the ball and finally, with 2 seconds left, tie ballgame and Laker ball at midcourt, Odom threw a horrible inbound pass to Kobe which was easily batted away by Jason Kidd forcing OT.

Phil Jackson needs to be held accountable for that decision, though. Upon seeing Odom trot to the sideline to take the ball to inbound it, we figured there was a 50-50 chance that the ball wouldn’t even reach its intended target.

When Bynum makes it back from his injury, we foresee some lineup changes that will probably result in less playing time for Lamar. His physical abilities are phenomenal but the guy drives us absolutely nuts with his mental execution or lack thereof.

All in all, not a bad day of hoops here in SoCal.