Courage: your definition may vary 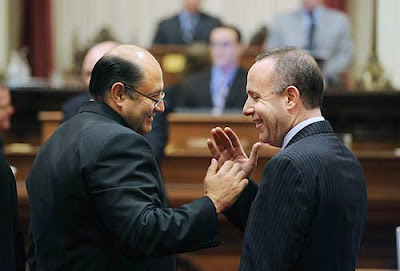 "Mark our words: There's not going to be any more taxes from this body"

So says California Assembly GOP leader Mike Villnes after the state Senate pulled an all-nighter to pass the budget and which was sent to the Assembly this morning for rapid passage and which contained horse-trading provisions as an open-ballot primary referendum and dropping a 12 cent/gallon hike of the gasoline tax.

And if you believe what Villnes says, we’ve got some beach front property in Yuma we’d like you to take a look at.

This “budget” includes $12.5 billion in tax increases which includes raising personal income taxes, already the highest in the nation and a 1 cent on the dollar raising of the state sales tax also the highest in the nation. Vehicle registration fees will also double under this budget and the irony of these same outrageous fees paid under former Governor Gray Davis that was used as one of the rallying points to recall him and which paved the way for the current governor was not lost on us.

And we’re supposed to be mollified by $14.8 billion in spending cuts much of which aren’t real cuts just cuts to the automatic budget increases for that particular budget line item.

Well, it was a game effort by the G.O.P., but as we like to say about our fair city here in the extreme southwest corner of the nation… San Diego: the city that almost gets it right.

Republican legislators had a golden opportunity to end business as usual in Sacramento and they failed. With a chance to upset the apple cart, cheese-off a bunch of people and stand athwart the back-asswards nature of how this state is managed, they caved.

And for his part, Governor Scharzenegger called the legislator’s work “courageous”, proving that Sacramento and those inhabiting it are foreign to the planet the rest of us live on as we attempt to reconcile how it is that sticking the tax payers with an additional $12.5 billion in taxes and $14.8 billion in smoke’n’mirrors budget cuts is some how “courageous”.