Wham-bam, no thank you, ma’am! (UPDATED) 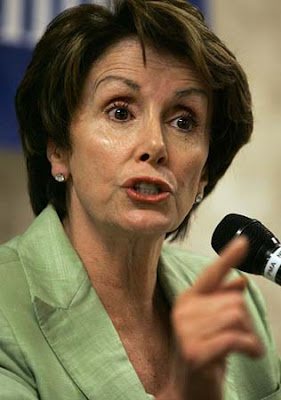 Rep. John Culberson, TX claims the "stimulus" bill must be urgently voted on today -- because Speaker Nancy Pelosi is leaving at 6:00 PM for an 8 day trip to Europe!

It's nice to see we've got our priorites straight on this one.

Sen. Frank Lautenberg (D-N.J.) predicted on Thursday that none of his Senate colleagues would "have the chance" to read the entire final version of the $790-billion stimulus bill before the bill comes up for a final vote in Congress.

In actuality, we know enough about this bill already. Its doubtful we're going to find a baby in this porkulus king cake to make us change our mind, however, it's all about keeping an open mind so we'd like some more time to review the final product in full, Madam Speaker.

The bill now clocks in at 999 pages and was just made fully available late last night.

Handing the new administration a big win, House Democrats passed President Barack Obama's $787 billion plan to resuscitate the economy on Friday despite a wall of Republican opposition. The bill was approved 246-183 and sent to the Senate, where a vote was scheduled late Friday afternoon.

Yes, it’s all about the scoreboard but when 7 members of your own party cross over to vote against it and you were unable to peel off one Republican, the descriptive “enjoyed broad bi-partisan support” will have to take a powder.

And here’s House Minority Leader John Boehner explaining to America just how it is most legislation in this country gets passed.

We’re with ya Mr. Boehner but we’re wondering where this sort of indignation over spending was some 3,4, 5 years ago when, you know, “conservatives” controlled both the House, Senate and the White House? The Republicans had their chance and they blew it and now we are all going to pay the price for the fiscal restraint non-compliance of the Bush years..

Stimulus porkage is more like it. As Rush said today, this is about fundamentally altering the role of government to make voters into Democrats by addicting them to government largess. Unfortunately, I believe that the economy is already recovering. Professor Perry at Carpe Diem, has some excellent reading material that points to that fact. If so, the extra government spending during an economic recovery will either drive up interest rates or cause an inflation, either of which will choke of the recovery. Thanks in advance President Obama.

I posted about the frenzy of speed at the Obama White House. There are lots of ancillary effects to valuing speed above all else. For one, they never had any intention at all of cooperating with Republicans. Second, it's clear they don't know what they're doing.

This is a balance sheet depression. If the Feds took $800B+ and simply paid off corporate and personal loans, I could see some value in it. At least there would be no increase in the aggregate debt. Instead, this is just adding another $800B on top of the nation's overall debt.

B-Daddy, I'd be careful with Carpe Diem. His track record of predicting things is pretty poor.

KT,
Thanks for the warning. However, it is also my own personal opinion, so I am willing to go out on a limb on quoting "Carpe Diem."