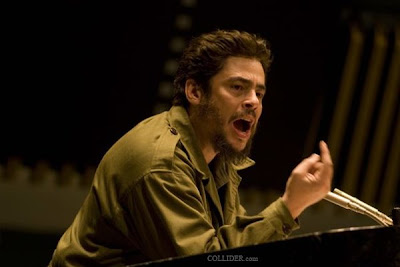 While the theaters are seemingly awash in movies depicting the horrors of the Nazis and of the Holocaust, its seems our boy Che is also getting the star treatment.
Just a few years after “The Motorcycle Diaries” young Che’s coming-of-age buddy flick, we get into the meat of Che’s political career in “Che” starring Benecio del Toro… except we really don’t because, dammit, nearly 4-1/2 hours isn’t enough time to get into everything.

The actor who portrayed Che in the movie, Benecio del Toro proves himself to be yet another useful idiot when he grew agitated and walked out on an interview when asked to address some of the inconvenient truths regarding Che, huffing:
"We can't cover it all," Mr. del Toro said. "You can make your own movie. You know? You can make your own movie. And let's see. Do the research."

The research has been done, Mr. del Toro. Among the many books that have been written about Cuba’s gulags is one the linked article mentions and is Against All Hope written by a man, Armando Valladares, who spent years in the Cuban prison system and which is also a book we happened to have read… well, almost. We only made it through about 2/3rds of the 400+ pages as we simply became numb to the repetive nature of Valladares’ imprisonments and the torture and abuse he experienced while in prison.

No Depression, our leftist Americana music monthly went under and to fulfill the terms of our subscription we’ve been getting this Spin magazine-like rag called Paste. Paste, also provides cover by copping the totally lame not-enough-time-in-the-day excuse. Here’s the opening paragraph from the magazine’s review of Che’:

It is simply audacious to make a four-hour plus film about the guerilla struggles of Argentine revolutionary Ernesto “Che” Guevara without ever really speaking of Guevara’s life as a doctor, his eye-opening motorcycle trips across South America, his family, his relationship with Fidel Castro or his work in the Cuban government.

But you’re hip to the fact that “his work in the Cuban government” is just a nice and polite way of saying, “Castro’s strong man”, “architect of Cuba’s concentration camps” and of course, “murderer”.

We continue to marvel at the depths of foolishness and folly educated Westerners attain when observing and commenting on the most dangerous political ideology this planet has ever seen.

Too bad Joaquin Phoenix is giving up acting. He has the new "Che" look and showing similar mental skills of Benecio del Toro.

Check out the video on Letterman

The hottie he lands in Argentina in "Motorcycle Diaries" makes it all good.

Something must be wrong with me, because, for the life of me, I just cannot get my mind wrapped around glorifying a child-murdering thug like Che, who in his own words, sought to whip up hatred to further the cause of his revolution. What a far cry from the honorable motives and words of our founders in the Declaration of Independence, which appealed to both God and reason in justification of a revolution that gave more, not less freedom to the people.