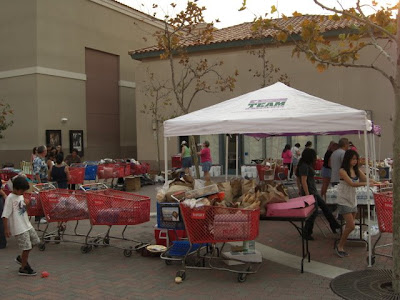 We liberated from the comments section of our post yesterday, these thoughts from the voice of reason in BwD Nation and a man who has extensive experience in community organizing and disaster relief (being a husband and father of five will do that). Pops wrote the following:

Our experience with the Red Cross bureaucracy would probably not be much different from dealing with the government bureaucracy. About ten years ago, our church wanted to offer our church gym as an emergency shelter location. The gym would have been perfect; the large gym floor for cots, adjacent rest rooms with showers and a large kitchen. We had a meeting with the Red Cross and got the official word on Separation of Church and State and other bureaucratic regs. Our thoughts were “We are a church and these people would be guests on our property. We don’t take the cross down.” Obviously, the gym did not become a shelter.

Our Katrina experience was no better. We have group called Friends Disaster Service. We have an equipment trailer and a crew of folks ready to go, many being experienced construction types. We tried to work with the Red Cross to no avail. The concept of working with a semi-independent organized unit was outside their bureaucratic thinking and something that they would not consider. We would have to volunteer as individuals assigned by them. If one of our group lived across the line in LA county, he would be assigned to an LA unit. Our own equipment trailer was also alien to their thinking. Several people from our church but not in the FDS group took the Red Cross training but were never called.

Our solution was to find a town that was hard hit but far enough from coast that heavy equipment was not needed. We contacted the pastor there and asked what was needed. He said to come with all the chain saws that we could find. The FDS group was there quickly and spent about 5 days clearing fallen trees. We made a least 6 more trips on subsequent aid projects and formed a strong bond with Wiggins MS with no bureaucratic assistance. When the tornado hit Greenberg KS, we didn’t bother connecting to the Red Cross or FEMA, we just went. Dad

The intent of this is not to slam the good intentions of the Red Cross or even any of the good work that they or any other large charity/relief organization does, governmental or otherwise.

It is to point out that sometimes (many times?), relief efforts are best stood up independently and organically outside the normally recognized boundaries of Big Relief.

Recall our friends, San Diego private citizens Angelo and Diane, waking up on a morning when the October ’07 San Diego wild fires were ablaze and deciding that they could make a difference. They drove to a Target shopping center near the fires and set up what is now the international symbol for domestic disaster relief coordination, the camping canopy, and began doing business.
That canopy became a node for the acceptance and dispersal of relief aid and, as importantly, a node for collection and dissemination of information… who needed what and where.

It was to the point that even the Red Cross, Salvation Army, KFC and Subway were dropping stuff off at Angelo and Diane’s canopy. And it seemed that the majority of the volunteers helping Angelo and Diane did not even know them before that day.

And I’ll defer to Mongo but we’ve noticed a drop in graffiti in our ‘hood once we decided the San Diego graffiti abatement hotline was neither and we just started cleaning-up the graffiti on our own as quickly as humanly possible once it showed up.

Small, independent, quick acting/reacting seems to be the way to go in our not-so-humble opinion.