Paraphrase of the Day 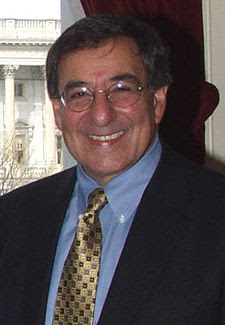 … that we hope was taken completely out of context.

Panetta said, however, he believes the greatest weapon the United States has against terrorists is its moral authority and commitment to the rule of law.

Outstanding. Finally, someone who truly understands the value system of a terrorist. Thank goodness for a man like Panetta who has been able to worm into the mind of the bad guy to see what makes him tick.

The terrorists will most certainly stand down once our blazing moral authority that sits like a beacon on a hill casts its rays of awesomeness across the globe.

But to Panetta’s and the Obama administration’s credit, they will not prosecute CIA officers who participated in harsh interrogations that critics say crossed the line into torture.

Additionally, and what will surely be another blow to the nutroots crowd, the Obama administration will continue to hand foreign detainees over to their country of origin for questioning on the condition they not be tortured. This has long been U.S. policy but some former prisoners subjected to this process known as “extraordinary rendition” during the Bush administration claim they were tortured just the same.

We’ve no doubt the Obama administration will be able to extract the same iron-clad guarantees from these countries-of-origin that did the Bush administration and we look forward to another Hollywood movie chronicling the same.

While the nutroots will be disappointed with these decisions, in the case of renditions, Obama painted himself into a corner with his decision to close Gitmo. The detainees will have to go somewhere…. transferring the detainees here stateside is highly unpopular and putting a bullet in their respective heads would be seen as somewhat un-American so… what options are left?

We do take a small amount of encouragement from seeing that moving from the campaign trail to the actuality of the Oval Office has seemed to lend some clarity to the task at hand when it comes to this nation’s security.

If I were Obama, I would slow roll the Gitmo thing with numerous "studies" maybe a few court cases, and in general kick the can down the road to see if it gets forgotten. Kind of the opposite of "running it up the flagpole to see if anyone salutes."