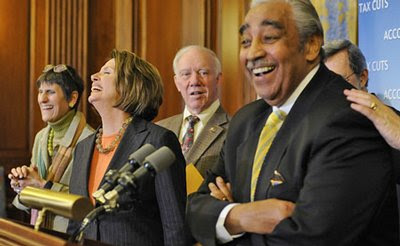 PALO ALTO, CA - An international mathematics research team announced today that they had discovered a new integer that surpasses any previously known value "by a totally mindblowing shitload." Project director Yujin Xiao of Stanford University said the theoretical number, dubbed a "stimulus," could lead to breakthroughs in fields as diverse as astrophysics, quantum mechanics, and Chicago asphalt contracting.

How galling is it that Chuckie Rangel, pictured here with Nancy Pelosi and 3 other dudes we don’t recognize, who can’t see his way clear to paying his fair share of taxes is front and center at this stimuloid photo op? Apparently, not very. Say nice things about an old man on his birthday and you’re drummed-out of your Senate leadership post. Fail to pay taxes or accept sweet heart home loan deals and you suddenly attain some sort of absolute moral authority on Capitol Hill and bizarrely enough, aquire the role of “reformer” in attempts to legislate our way out of this mess.

And here’s Rahmbo on a tactical mistake in campaigning for the stimulus bill:

Mr. Emanuel owned up to one mistake: message. What he called the outside game slipped away from the White House last week, when the president and others stressed bipartisanship rather than job creation as they moved toward passing the measure. White House officials allowed an insatiable desire in Washington for bipartisanship to cloud the economic message a point coming clear in a study being conducted on what went wrong and what went right with the package, he said.

It was actually a shrewd move by the President, in our opinion. We don't think the passage of the bill was ever really in doubt so why not extend an olive branch, even if it was entirely symbolic and not backed by anything of substance, to smear the Republicans as "obstructionists" at a later date which is exactly what happened.

And given what all went down the past week or so, we wonder if this bill is the President’s or Pelosi’s?

Finally, B-Daddy is absolutely stoked about porkulus and shares his thoughts as to why, here.