Super to the End 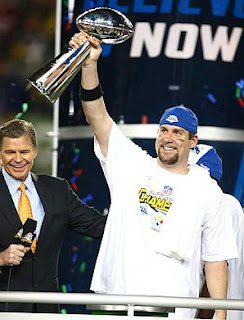 Congratulations to the Pittsburgh Steelers who have now won an unprecedented 6 Super Bowls and who have solidified their claim as America’s Team in last night’s 27-23 victory over the game (and covering) Arizona Cardinals. Some spot overnight thoughts and observations of the game:

Recent Super Bowls have become like NBA games: rather sloppy, disjointed affairs throughout much the game to where one can just tune into the 4th quarter to see who will win. And this is fully meant as a compliment. With all the partying, eating, drinking and socializing going on at Super Bowl parties, who’s actually got the time to sit down and pay attention to the entire game when all that’s really needed is an exciting 4th quarter to lock-in to. You’ve got a good thing going there, Commissioner Goddell – keep it up.

When Larry Fitzgerald scored with about 2:30 left in the game to put Arizona up 23-20, we were thinking: “Man, that’s too much time left for Ben Roethlisberger”. Yes, Big Ben has moved into that category. Or was it perhaps because we knew that Arizona would sit back in a soft prevent zone and allow the Steelers to march right back down the field? The gift that keeps on giving, that prevent defense. We kept hearing how Santonio Holmes long gain on the game-winning drive was a result of Aaron Francisco who was covering Holmes, "slipping" on the play. Nonsense. He took a horrible angle and slipped as a result of attempting to recover from that bad angle. He wasn't going to catch Holmes anyway.

For all the times that the refs felt compelled to insert themselves into the ball game (20 penalties in all), two plays at the end of the game went begging. After Santonio Holmes’game-winning catch, Holmes takes the ball and mimicking LeBron James, “shakes” some powder into his hand before throwing it into the air. “Thou shalt not use the ball as a prop” says the non-celebratory rules as handed down by the NFL. Also, on the very last play of the game, Kurt Warner fumbles the ball… but did he? Looked like a forward pass to us and under two minutes all plays are subject to a booth review by the officials on high. It was a curious omission.

The Cardinals team/organization have that “caught lightning in a bottle” quality to them. They look like they are progressing in the right direction under head coach Ken Whisenhunt but it would not surprise us in the least if they just returned to 7-9 mediocrity next season. The Pittsburgh organization on the other hand is built for long-term success. Just what is it about this team and organization that would make you think they won’t be back in the Super Bowl again next year? Remember, this is the year the vaunted Steeler run game never really got cranked up because of injuries to running backs and offensive lineman.

Bruce was solid if a little rough around the edges in the half-time show. Thanks, Boss, for hooking us up with our requested/predicted “Tenth Avenue Freeze Out” right out of the box. Having said that we’d be fine with hammering the name plates of “Bruce Springsteen”, “U2” and “Flavor-of-the-Month” to the tavern bar of the NFL half-time show on a 3-year rotating basis. The Super Bowl is the ultimate in Americana entertainment comfort food – no need to get too exotic – go with what you know.

Only 219 days until we tee it up again in September.