Whether you’re a newspaper trying to sell copies or a Presidential administration trying to sell porkulus, there are a few simple guidelines to be observed and one in particular that we saw played out over the course of 24 hours this past week.

Bad news like the report that came out that median home prices for the county had fallen below $300,000 for the first time in seven years should be placed right next to an article on Obama’s proposed bailout of individual homeowners and should also be festooned with splashy multi-color graphics like the one below and which was seen on the front page of Thursday’s San Diego U-T. 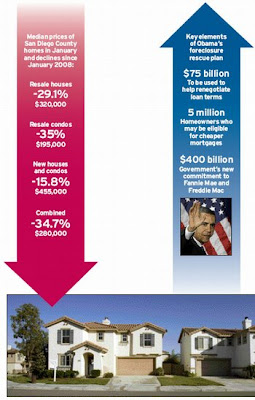 However, news that the housing affordability index is approaching the 50% mark for the first time in years in 15 years and that existing home sales in Southern California have increased 52% from last year should be shuttled off to below-the-fold of the Business section as is what happened on Friday.

The news on housing affordability and increase in home sales is encouraging and is demonstrable of what should be happening in an inflated housing market that is trying to find the bottom without any outside intervention. The increase in home sales is a positive sign that perhaps the housing market is close to finding that bottom and is evidence that the free market is wringing the poison and bad actors our of the system… all of which should be left alone so the whole process can run its course.

Unfortunately, no one wants to hear that when leveraging the “worst economy since the Great Depression.”

Good read here from the WSJ on the President’s fear mongering and his convenient looseness with data.

Mr. Obama's analogies to the Great Depression are not only historically inaccurate, they're also dangerous. Repeated warnings from the White House about a coming economic apocalypse aren't likely to raise consumer and investor expectations for the future. In fact, they have contributed to the continuing decline in consumer confidence that is restraining a spending pickup. Beyond that, fearmongering can trigger a political stampede to embrace a "recovery" package that delivers a lot less than it promises. A more cool-headed assessment of the economy's woes might produce better policies.

As I walked through Ceasar's palace on my way to class each day last week, watching the gamblers and shoppers. I kept thinking to myself, "where are the people standing in bread lines?"