Wanted: warm, caring and nuturing environment in which to call home 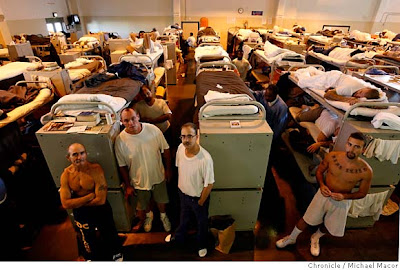 A special panel of federal judges tentatively ruled yesterday that California will have to reduce its prison population by tens of thousands of inmates to relieve overcrowding over the next several years.

Now, what could possibly go wrong with that?

On the bright side, there will be some real estate freed-up down in Cuba, shortly, to help ease this umm.. manning crunch and just think of all the money that our cash-strapped state will be able to save by not having to feed, clothe and house tens of thousands of inmates.

Those bunks are bigger than my rack on the ship, and look more comfortable!

(Seriously-- they did this story four years ago. I remember it being on the ship's news network, because all we talked about for the next week was how much we wished that our berths were designed by the folks who thought that THOSE were too inhumane.)

Foxie, I was thinking the same exact thing when I saw that picture. I've seen far more roomy and comfortable habs onboard gray hulls.

Besides, both types of inhabitants voluntarily signed up for that duty, no?

And since when has logic ever touched on the sacred duty of the enlisted to complain?