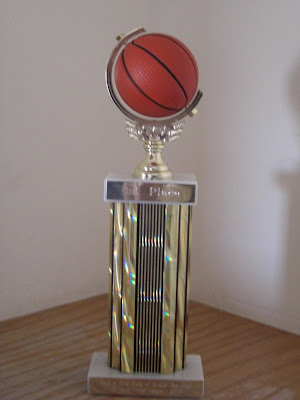 As readers of this blog have recognized, this is not a personal blog. Its not personal because any paltry readership that is scared up would be bored to tears and wasted-away with any recounting or relating of my procrastinating nature, my fear of committment and destructive personal habits not to mention my constant brushes with the law, struggles with substance abuse, conquering of 2 or 3 life-threatening diseases and my time in the French Foreign Legion. From time to time, though, I will throw out a personal experience.
.
.

I coached 7/8th grade hoops up in North County this year. Technically, I assisted a former co-worker but often times I was the one with the whistle as the head coach would be on travel or at the games of his daughter’s soccer team of which he was also the coach.

Anyway, after getting our butts kicked by 15 points in the very first game of the season, we didn’t lose again as we played our best game of the season on Friday night in the championship game, winning by 22. That steady growth from seeing your guys run around without a clue in the beginning of the season to “seeing the light go on” by the end of the season to where they are running some semblance of the very offense you taught in practice ("hey, that looks strangely familiar – where have I seen that before?") and calling out and switching on picks on defense is one of the most gratifying things you can experience as a coach.

Well, almost the most gratifying.

Quick side note: About half the kids’ parents are first-generation immigrants of Asian descent and I was getting a kick out of being able to witness, first hand, their efforts to figure out just how it is you “thank” the coach at the end of the season. I’ve been showered with gift cards to Starbuck’s and Chili’s in the past but one of the parents, “Richard”, decided to solicit cash from the parents on a team schedule email thread and I was thinking that this would be converted into some form of gift card, as well.

After Friday’s game, Richard presented Coach “Jay” and I with an envelope and inside was a card which contained…. straight cash, homie! Sweet. I felt like a kid again getting hooked up with some green backs from my grandmother for my birthday.

Anyway, each of the kids or the kids’ parents wrote a quick little “thanks, coach” blurb on the card. One of the little thank yous caught me completely off guard because of the source. “Eric” was definetely on the bottom half of our roster when it came to talent and I think I heard him say a grand total of 5 words the entire season. Though not the most physically gifted player on the team, no one listened and executed better in practices and games what was being taught in those practices. Eric made gradual improvement through the season to where, though quite honestly he was still a bit of a liability on offense, he was playing very good on-ball and team defense (and that’s all Coach Dean really cares about).

Eric’s parents wrote the following: “Dear Coach, Thank you so much for a great season! You really brought out Eric’s love for basketball!”

Two things: A) You never know. You have absolutely no idea what sort of impact either for better or worse you have on those around you particularly in that sort of dynamic. And B) If I could bottle the feeling I had after reading that and which I had for the rest of the evening, I’d be a very rich man. Basketball is quite simply the greatest game ever invented. There is not even an argument to be made for any other sport, so to think I played some part in stoking a kid's fire for the game was humbling, indeed.

The season ended too soon. We were playing well but there is always improvements to be made. We still never really ran the against-a-zone offense all that well. I wonder if the kids would want to get together to work on it… you know, have practices? Gosh, so much to learn – so much to work on. Yeah, I’ll start making some phone calls and…..

We now return you to your regularly collegial and fraternal 2nd person-plural programming.

P.S. A secret weapon? I will never know for sure but I have to think that having as all our team’s primary ball-handlers, left-handers, had to give our opposition fits. Even as a lefty myself, I always hated guarding other lefties.

Dean,
You are a rich man, in the ways that truly count. Well done brother.

Coaching kids is one of the truly rewarding experiences in life.

Dean,
I have only this to say. Dean, I love you.